There is high debate amongst nutrition and fitness enthusiasts as to whether alcohol should (or even could) be included in a healthy diet. This article reviews both the benefits and the detriments of drinking alcohol when trying to achieve specific body composition goals.

For over 10,000 years, humans have been preparing and indulging in fermented beverages as well as arguing their merits and demerits. As the argument continues, it’s safe to say that alcohol is both a tonic and a poison. The difference, however, lies in the dose.

For such a controversial beverage, one would wonder how beer and wine came about in the first place.

The Role of Alcohol in Nutrition
The beer and wine we know today are far different than what was originally brought about. It was a thick, gruel-like concoction that must be filtered through a straw when drinking. Although unappetizing in our minds, this drink was an important source of calories for ancient Sumerians.

As civilizations began to evolve, so did the production of alcohol. In England between 1001 and 1500 A.D., for example, ale was the common drink consumed by adults and children throughout the day as this fermented beverage was often safer to drink than the water in town.

As the agricultural revolution came about (and the effects of alcohol became more well-known), our eating and drinking habits began to shift more towards what we see today. Brewing, fermenting, and distilling became an art to create better flavors and a smoother texture.

This made drinking alcohol more recreational than nutritional.

Healthy Meals with Alcohol?
Our favorite liquid courage can definitely make for a fun social time. It’s tasty (thanks to the hundreds of years of perfecting the process), may help us to relax, and can be a gateway to some amazing memories with friends and loved ones.

However, as we aim to improve our health, prep meals, and improve our physique, regular consumption of alcohol is not ideal. And when those social opportunities arise, it can be difficult to just say no — and, anyway, haven’t we earned the right to indulge every now and then?

In order to understand whether or not we can enjoy some boozy bubbly without losing all our progress, we must first understand the impact alcohol can have on our bodies.

Alcohol is technically considered the fourth macronutrient, as it contains calories and can be found in large amounts (compared to micronutrients) in the body. However, it is not required by the body and operates much differently than protein, carbs, and fats.

How Alcohol Affects Our Body Composition
Our bodies want to process the alcohol before handling anything else. Therefore, in the presence of our favorite boozy beverage, the body may not be able to metabolize the other three macronutrients (protein, carbs, or fat). This, in turn, may negatively impact muscle protein synthesis.

Muscle protein synthesis is a naturally occurring process used to repair muscle damage, often caused by intense exercise. When in the presence of alcohol, this process is shut down or at least severely diminished, negatively influencing our ability to build muscle.

As well, alcohol may raise estrogen levels, lower free testosterone, deplete zinc levels, and result in lower testosterone production. Not ideal for anyone looking to gain strength or even tone up those muscles.

Our body — specifically our hormones — work best when in balance. When things are thrown out of whack, say after a night out on the town, the body has to work even harder to get back to a balanced state.

In general, we could almost think of alcohol as the “anti-fiber” of the body. Whereas fiber keeps things moving smoothly in the GI, our bubbly slows down metabolism, and normal processes become interrupted.

Scale fluctuations are also common after a night out. The morning after is often deceiving as the scale will most likely be lighter (due to dehydration). However, in the following 2-3 days after drinking, we would potentially weigh even more. From there, it takes an additional 3-4 days for the scale to resume normal activity.

That’s potentially 5-7 days before your body resumes normal activity (depending on how much we consumed). So, if we’re headed out for Friday beers with coworkers every week, it is extremely likely we won’t be able to properly track our weight losses or gains.

How drastic the fluctuation is not only dependent on WHAT and how MUCH we drink, but also our food choices surrounding our drinks. Alcohol changes the way our brains make decisions, making that heavy, calorically-dense pizza look way more appetizing than that garden salad with balsamic vinegar.

How to Minimize the Damage
But hey, that doesn’t mean we have to give up drinking to see results. Sustainability and flexibility are the names of the game, and the more we understand how alcohol affects us, the better we game plan. Here are some strategies to minimize the damage on planned drinking days or nights.

Crush Some Activity Before-Hand
According to a new study, regular exercise may counteract some of alcohol’s long-term health risks. After reviewing over 36,000 survey responses in England and Scotland between 1994-2006, the study found that heavy drinking was associated with an increased risk of death from all causes.

But when they factored in physical activity, researchers found the links between drinking and death remained for people who got less than the recommended minutes of weekly physical activity. Those who moved at least 150 minutes a week, however, experienced decreased risks or none at all.

Even more, people who were physically active and drank occasionally (not every week) seemed to have a lower risk for cardiovascular death than those who never drank. So, aim to squeeze in a good workout the morning of as well as netting 7-10k steps on the occasional drinking day.

Set Limits PRIOR to Going Out
As well as limiting drinking to 1-2 times per week, it’s important to limit the nightly amount of booze. For those seeking fat loss or are tracking their calorie intake, it’s important to note that 1g of alcohol contains 7 calories, affecting the overall caloric intake for the day.

A good rule of thumb to avoid consuming too many liquid calories set a limit of 30-40g of alcohol on these nights (280 calories). This would look something like this:

If tracking calories/food intake it may be best to mark this as fat (9 calories per gram) to provide a calorie cushion for the inevitable snackage that ensues after a night of drinking.

Create Healthy Meal Prep Options
Speaking of creating a caloric cushion, keeping breakfast and lunch protein and veggie-heavy frees up a little macro cushion for later in the day (as well as keeping us fuller, longer). Among men and women, alcohol consumption is associated with a decline in total diet quality, apparently due to higher energy intake from alcohol as well as other differences in food choices.

Keep food quality high both before and around the time of drinking. Having healthy meal options on hand makes it easier to make healthier food choices, especially if alcohol has a tendency to diminish your willpower. Remember to stay hydrated well enough for the body to absorb all the right nutrients before alcohol enters the system.

Choose High-Quality Bubbly
In order to keep the entire night high-quality, both food and alcohol should be top-tier. This ensures nothing extra or unwanted goes into our bodies. As well, it may be best to avoid mixing alcohol with sugary drinks and juices.

Researchers from Northern Kentucky University found that mixing alcohol with other diet soda-like beverages increases blood alcohol concentration. Researchers explain the effects of alcohol are mitigated if consumed with nutrients like sugar because it slows the entry of alcohol into the small intestine, where it is absorbed by the body.

Feel free to swap out the sugary diet drinks with Zevia, Kombucha, or simply sip each drink on the rocks.

Set a Drinking Bedtime
While 2-3 drinks before bedtime initially promote sleep, the effects are diminished with consistent use. Sleep researchers have performed experiments with healthy non-alcoholic subjects to study these effects. It turns out, alcohol begins to inhibit REM sleep in those who ingested high doses within an hour of bedtime.

Chronic REM sleep deprivation is linked to a greater risk of obesity, Type 2 Diabetes, dementia, depression, and more. As well, insufficient REM sleep may be the cause of all those hangover migraines. To combat this, set bedtime and stop drinking at least 3 hours prior.

Putting Together the Game Plan
Using the following strategies is a great start to finding freedom in drinking and improving performance/physique goals. Through proper education and understanding, we can accordingly game-plan the frequency of alcohol in our lives while minimizing the damage done. It’s certainly okay to snag a few drinks on occasion, and it’s likely not going to completely derail our progress — when planned out.

However, for those struggling to achieve results, it may be best to minimize alcohol consumption as much as possible to see if that was the limiting factor.

Rachel is a Certified Strength & Conditioning Coach, as well as a Certified Nutrition Specialist. She is deeply passionate about connecting people with ideas, goals, and opportunities for bettering their lives. In addition to helping others, she enjoys expressing her creativity through writing. In a single year of working as a copywriter for Ad Zombies, she has written over 3,000 ads for several platforms including Facebook, Instagram, Pinterest, Blogs, Sales Funnels, and more. 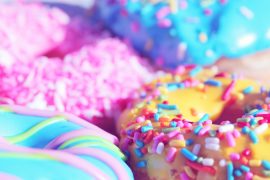 What Are Food Cravings Saying About Our Bodies?

Set Point and Settling Point: What Do These Theories Mean for Your Weight?